I first met Knox Martin seven years ago, and every June 6 since I’ve heard his voice.

Back then, I was writing for NYC weekly Chelsea Now about Martin’s “Venus” mural on 19th Street and the West Side Highway, since obscured by Jean Nouvel’s 100 Eleventh Avenue condominium complex. When I learned Martin, still fighting for his new anti-war mural “Killing the Whales,” was a veteran of Omaha Beach, I knew I had to talk to him for the book; we sat in his Washington Heights apartment, where he showed me the clipping at left – which was the only way his mother knew, in 1945, that her younger son was alive.

Below are some highlights of what he told me, which my paper published that August for the 60th anniversary of the war’s end.

You mirror your dad, pioneer aviator William Knox Martin, in that you’ve embraced both art and science.

Yes. My father’s uncle was putting him through art school at the University of Maryland, when he walked out of his house one day and saw this thing flying through the air. Very primitive—the airplane had just been invented in 1906. And he said, “This is what I want to do with the rest of my life.”

I was going to be a scientist, too. I went to DeWitt Clinton High School in the Bronx, a school known for graduating scientists. I was doing a lot of drawing while at school and was drawing for a WPA project. I was also an avid reader. I was so advanced, I dropped out of the school because I thought, I’m not learning anything here I don’t already know. My father then died, and my uncle asked me to come to Virginia.

You were 19 when Pearl Harbor was hit. Did you know right away that you were going to war?

I knew it was coming: I was an early reader. I read the paper and thought, How can this be, about Hitler? We were at a wealthy family’s house in Scarsdale, N.Y., where the owner was for Hitler. When everyone was out on the lawn, I took every piece of furniture and wrote “Death to Hitler” on the bottom of each one. Then when the Japanese attacked Pearl Harbor, It felt like a deep wound.

I didn’t go in right away. After my father died in 1941, I went to work for the Northwest Railroad, traveled through Virginia and Ohio. In the morning, you’d see for miles upon miles telephone wires glistening with spider webs. And the people were unbelievable! Living in pre–Civil War lives! But then I got into a fight with a supervisor and came home to New York. And everyone was in the service.

Why the Coast Guard?

My stepfather was a commercial fisherman, so we grew up around boats. He’d been in the reserves for years, so they made him head of this boat pool at Ellis Island. 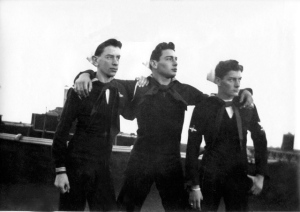 We did boot training at Manhattan Beach, marching, gas masks, everything. Then we put in for a sub chaser and were sent to Mystic, Conn., to one of the most beautiful ships in the world: the 83-500. It was dark like a submarine, would submerge and turn itself upside down, depth charges underneath and rockets on the bow. We did this “bombing run” practice in Florida. They said there were German submarines in South America, but fortunately we never met one.

Normandy—it was an armada, you said.

We’re crossing the Atlantic and as far as you could see: cruisers, battleships, every kind of craft. The water was just full of ships. And the sky was blackened by planes going over, wave after wave after wave.

The Germans had a fantastic machine gun, and guys were dying everywhere all over the place—the water was littered with bodies. The invasion was threatened by a storm, so they made a harbor by sinking ships—a breakwater, 40-some-odd liberty ships. None of us slept for two nights; we were frazzled and hysterical and crazy. Then came that morning on the beachhead, lit up like the Fourth of July. There was this feeling, of being one organism with one goal, to get up on that coast and crush this thing: tyranny.

I do have to say, one of the greatest things was the atom bomb on Hiroshima. They had this little island—I saw it—where the Japanese fought to the last man. They would have done it; millions would have died. And before the bomb was dropped, the Russians were coming from the North, ready to invade. You would have had a Berlin wall of Tokyo.

You were discovered as an artist in a veterans’ hospital!

The first day when I came back, my mother greeted me—the tears. She was happy to see me but then said, “Your brother Morris, he’s gone. He was killed flying over Japanese waters.” How could this smart, great guy be gone? It wasn’t that I was divorced from reality, but the meaning of things changed, and I began to draw again. A guy came by the hospital on a project to work with “wounded veterans.” His name was Victor Kandel. I showed him what I was doing, and he said, “Hey, you’re a real artist. I would advise you to take private lessons.” So, I went to the Art Students League on the GI Bill.

In those days, everyone there was a Communist. It was my opinion that we were next going to fight the Russians. My uncle was in military intelligence: I knew what Stalin had done—how many mass graves. They would ask me, “Knox, why don’t you join the Party?” I said, “Ask me again, and I’ll see you in a rifle sight.”

Your mural, the one you’re still fighting to get made, was started as a statement about the Vietnam War.

Here’s what happened. The war starts; we’re after the Commies. It was great! Hit the Communists! Then, all of a sudden, on Sunday afternoon, what do you get on the TV? The war. It’s not an abstraction. A girl, a civilian, running from napalm. One guy, another civilian, sitting at a table, a soldier shoots him in the head. We all burst into tears. That’s why there was protest at all.

The young Knox Martin at the Art Students League

After my so-called success with the 19th Street piece [“Venus”] in 1972, I did the first maquette for this [current] mural. I tried to get it done everywhere. I figured I’d done the other one, Geraldo Rivera on the scaffold, and it would be a slam dunk! But—nothing.

You thought you had it this time, after Community Board 2 said yes and Cape Advisers [the developer of Jean Nouvel’s project] agreed to pay for it.

Two years of work, hundreds of people involved, and this one person—Michelle Cohen [of Art in the Schools] said, “This can’t be built now, or in the future.” She said, “It is not the content, not your credits.” What is it, then? Silence.

When I first talked to her, the first words out of her mouth were: “We have no funds.” I came up with the funds, and she said, the building can’t be touched for four years. I said, “The contractors working on the school say now’s the time to do it, not when the park is finished.” She said, “It’s dangerous for students.” I said that it’s on the back wall, away from the students. She said, “You can’t hang from the scaffolding; it’s too dangerous.” I said, “I’ll get a very slim cherry-picker, not me the fat guy.” She said, “Not on DOE property!” I don’t know her real objections, but it’s not over.

Any last words? Overall connections between the artist and the veteran?

This is the infancy of Planet Earth. You don’t join a group, an army. Just be kind, look around you, and you straighten yourself out! You become a light unto yourself.

Look below for the rest of Knox’ D-Day story.