So I’m reading excerpts of Norman Mailer’s testimony in the trial of the Chicago Eight, trying to get a sense of the WWII-vet cabal that was supporting the protesters at the  Convention, when I get to this line: ” I was in my hotel room with Robert Lowell and David Dellinger and Rennie Davis.”  And no, I didn’t immediately jump to Mailer’s Armies of the Night, to search for signs of dialogue betweenDellinger, who co-edited pacifist magazines with Bayard Rustin before putting his energies to stopping the Vietnam War, and Army-vet Mailer. No, it was Lowell’s name that jumped out at me, because I’d just last night told a friend that he should revisit Lowell’s For the Union Dead. And yes, there’s a sign of the Lowell who got arrested with Mailer at the Pentagon and roomed with him in Chicago:

The ditch is nearer.
There are no statutes for the last war here;
on Boylston Street, a commercial photograph
shows Hiroshima boiling

over a Mosler Safe, the “Rock of Ages”
that survived the blast. Space is nearer.
when I crouch to my television set,
the drained faces of Negro school-children rise like balloons.

But  my mind was blown already, suddenly understanding with all my reading of the past year or so:

Shaw’s father wanted no monument
except the ditch,
where his son’s body was thrown
and lost with his “niggers.” 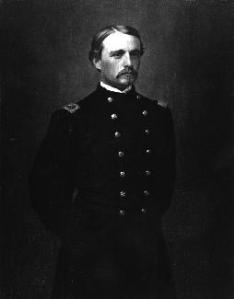 Shaw is Col. Robert Gould Shaw of the Massachusetts 54th (yes, the one played by Matthew Broderick in that movie.) Shaw’s “niggers” included

the remarkable Lewis H. Douglass (left), and he likely knew another of my characters, poor Charles Garrison of the 55th. All of it placing Lowell, with his meditation on Shaw, and I in funhouse parallel universes.

Below is a clip from that film that envisions the night before the assault on Fort Wagner of which Lewis wrote to his girlfriend,”I escaped unhurt from amidst that perfect hail of shot and shell. It was terrible….”

But  I raise my virtual wineglass to Lowell, and savor how he envisions the hero in afterlife, quietly counting on justice’s long arc:
Colonel Shaw
is riding on his bubble,
he waits
for the blessed break.