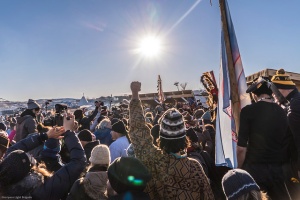 The TV cameras are gone now. So are most of the veterans I was tracking and wrote about for Guernica, upon the request of the Standing Rock elders. Everyone knows that last week’s decision was only a battle won, and that the struggle continues: the drilling below Sioux land isn’t even completely stopped, the company having decided that it’s easier to pay fines to the Army Corps of Engineers even at $50,000 a day. But there seems to be a pause in the satyagraha at that location, as everyone regroups.

Me?  I’m still in Philadelphia, musing about the big picture. I told my wife as she left for work, “I’m going to show that the Oceti Sakowin protests all began in Philadelphia.” By Philadelphia I mostly meant Chester native Bayard Rustin, who said long ago:  ““Our power is in our ability to make things unworkable. The only weapon we have is our bodies, and we need to tuck them in places so wheels don’t turn.” And I meant Quakers, who’ve been making trouble since before Philly was founded in 1682.

The thread I’m noticing now traces at least back to Thoreau, who told peers he was “more of a Quaker than anything else, and anti-slavery iconWilliam Lloyd Garrison, a non-Quaker but a fellow traveler like me (I call myself an “aspiring Quaker.”) Garrison, who got his start editing a Quaker anti-slavery newspaper, urged and practiced “nonresistance,” a kind of proactive pacifism based in part on Thoreau’s “On Civil Disobedience.”

I knew “nonresistance” from how it was used by World War I conscientious objectors like Evan Thomas, but if I’d been an actual historian I’d have known how ubiquitous a term it was among progressive types in the 19th century. It was even global, a favorite word of War of 1812 veteran Leo Tolstoy, who  wrote a letter to America, praising Thoreau and Garrison as pioneering visionaries:

I’d like to ask the American people why they do not “>pay more attention to these voices (hardly to be replaced by those of financial and industrial millionaires, or successful generals and admirals), and continue the good work in which they made such hopeful progress.

Tolstoy went on to become a leading exponent of radical Christianity, and a pen pal of a young South African named Mohandas Gandhi.

From Gandhi we can go back to talking about Bayard Rustin, Quaker thanks to his eminent and charismatic grandmother, Julia Davis Rustin.  Julia mentored Rustin as he went to work for the Fellowship of Reconciliation, which had been practicing the Quaker “peace witness” since 1915 and sent Rustin, the FOR’s “youth secretary,” across the country as a “Peace Ambassador.” She visited Rustin in prison when he went there instead of serving in World  War II, and cheered him on when he went in 1948 to India, newly freed by Gandhi’s movement.

Rustin arrived in India right after Gandhi died, but he met with many of those who’d helped him perfect the technique they had named satyagraha. The Indian activists admired Rustin’s own nonresistance, including the very first Journey of Reconciliation in 1947. And he came back bursting with ideas about using satyagraha on behalf of African-Americans. Soon, he was crossing the country to talk about how to use nonviolence to fight both militarism and racism.

His workshops were electric, one of its participants said years later. They had “actually talked about the history of nonviolence, the history of Gandhi…Thd whole philosophy of the use of nonviolent direct action to accomplish your goals and your purposes: That really appealed to me.” Once trained, many put it to use trying to integrate lunch counters, restaurants, pools.  From that phase of the civil rights movement to now is too much for one essay, and includes both Philip Berrigan and ACT-UP, which was founded in 1987, a few years before Rustin died.

I haven’t included anything here about Native American practice of nonresistance, or wondered if any contemporary Native activists have any use for Rustin or the Quakers.  However,  I suspect that this peace might be incomplete without it.