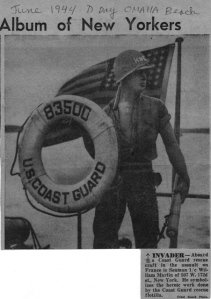 I first met Knox Martin two years ago. For one of my first Chelsea Now stories, I wrote about his “Venus” mural on 19th Street and the West Side Highway, since obscured by Jean Nouvel’s 100 Eleventh Avenue condominium complex. When I learned Martin, still fighting for his new anti-war mural “Killing the Whales,” was a veteran of Omaha Beach, I knew I had to talk to him for the book; we sat in his Washington Heights apartment, where he showed me the clipping at left – which was the only way his mother knew, in 1945, that her younger son was alive.

Below are some highlights of what he told me, which my paper published that August for the 60th anniversary of the war’s end.

You mirror your dad, pioneer aviator William Knox Martin, in that you’ve embraced both art and science.

Yes. My father’s uncle was putting him…