Not that often I’m caught out by an obituary. And I can’t believe I never heard of Colonel Anthony B. Herbert:

In August 1968, he joined the 173rd Airborne Brigade stationed in the central highlands of South Vietnam. It was there as commander of the Second Battalion of the 503rd Infantry, he said, that he witnessed what he described as eight war crimes, including serial executions of detainees and water torture of a prisoner.

He reported the offenses to the commanding general of the 173rd Airborne and his deputy. The next day, Colonel Herbert was relieved of his command and dealt a devastating efficiency report.

Actually, Herbert’s story was broken by Nick Turse at the LA Times in 2006, just as I was starting my book and long before he published the searing, vital Kill Anything That Moves: The American War in Vietnam. 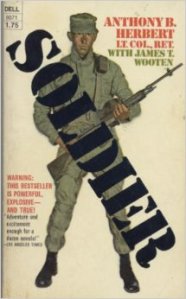 The NY Times obit notes that Herbert blew the whistle just as Hersh’s My Lai articles were inflaming the nation: I’d pay good money for any record of conversations between Herbert, Hersh, and the late great Hugh Thompson. Or Daniel Ellsberg, for that matter. Instead, time to read Herbert’s own book, published before he knew we’d all repeat the same sins in the Middle East.