When I’m not tracking that moving target, I’m making my last swim through the rest of the book, to tighten the prose and strengthen its themes. Of course, since I’m the one doing it, that latter task means just-a-little-more-research-please —  sifting through old files and asking the scholarship for bits that belong in that zig-zag of change. 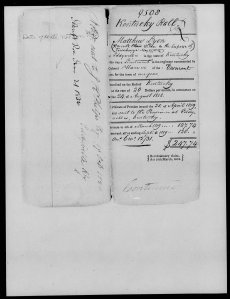 Yesterday, the question I was trying to pursue was:  OK, my 19th-century chapters are all about those original sins (slavery and “Indian policy”). But how much opportunity did earlier American soldiers have to resist enforcing either? Were they active participants or simply surrounded by the assumptions of the day?

In particular, I wanted to know if Continental Army soldiers, so conscious of their compensation, had dangled before them the promise of “empty” land west of the settled colonies. By the time the new century rolled around, as evidenced in the document at left, Revolutionary War veterans were claiming land grants as their due for their service. (That particular vet, Matthew Lyon, had by then survived being thrown into prison by John Adams.)  The answer, of course, was paradoxical: no such promise was initially made when Continental Army troops helped destroy Iroquoia or massacred the Pequot, but proved after the Revolution to be an easy way for politicians to solve problems.

“Independence had thrown into the lap of a none- too-perfect union the vast and unsettled area between the Great Lakes and the Mississippi and Ohio rivers,” reads an article in Agricultural History in 1946, by a historian named Rudolf Freund, who was seemingly oblivious to the fact that that “unsettled area” was in 1776hardly unclaimed by its original inhabitants.

American Indians are nonexistent in Freund’s piece,  but he does provide some other pieces of the narrative. It all started, as we learned in school, with the German-born Hessian soldiers who switched sides:

Curiously enough, land was first promised by Congress, in August 1776, to Hessians and other foreigners if they would desert from the English army, but nothing much came of it. The story of the military bounty lands really began somewhat later when Congress decided to offer land to its own nationals as an inducement for enlisting in the new army and for permanent service.

The ill- fated summer campaigns of 1776 made it depressingly clear to everybody concerned that the war could not be waged successfully unless the militia was replaced, at least for the purposes of sustained warfare, by an army of regulars who were willing to serve without interruption until victory was won. This was a radical departure from  previous practices, and it was clear that substantial rewards had to be offered to achieve the change from temporary to permanent enlistment. Therefore, when Congress decided in September 1776 to establish 88 regiments on State lines to serve during the war, the former money bounty of $20 was augmented by promises of land, ranging from 100 acres for a private to 500 acres for a colonel. The land was to be provided by the United States, and the expenses connected there- with were to be borne by the States in the same proportion as the other expenses of the war.

All of which was argued over to death in Congress, some by those hating the idea of a “mercenary” army and some by states that feared they’d pay more than others. No one, of course, pointed out the arrogance-crossed-with-hubris of the provision that “The land was to be provided by the United States.”  If Tecumseh had been older than eight years old at the time, perhaps he could have been the one to stand on the floor of Congress and ask: “Provided by who, white man?” In any event, in order to get the land portion of the bounty you had to sign up for at leeast three years or the duration of the war, and even then the commitment was nearly completely verbal. But then, Freund says, came Britain’s surrender in 1782, which suddenly did throw something unforeseen into the national lap: hundreds of thousands of soon-to-be-unemployed military men. “Our circumstances afford an odd Contrast to those we have heretofore experienced. The Difficulty which heretofore oppres’d us was how to raise an Army. The one which now embarrasses is how to dissolve it,” a major named Richard Peters  wrote to Washington adviser Baron Steuben.

By then, military courts and prisons had filled with thousands charged with desertion and insubordination, despite constant efforts to make the Continental force into more of a professional army. Washington and his fellow generals saw themselves as simultaneously fighting the British on one side, Indians on another, and on a third Continental legislators so wary of a standing army that they had still not paid any of the half-wages they had earlier agreed to give former soldiers. 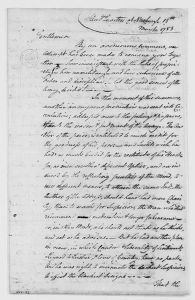 As the exhausted, enraged, still-underfed Continental Army camped out at Newburgh for the winter, Washington — like Wayne two years earlier at Mount Kemble — chose to stay in town instead of going home to warmer Virginia. What happened next, in 1783, is still a matter of controversy. What is not in dispute: that officers at Newburgh met repeatedly, fearing their fate as Congress contemplated peace and despairing of their repeated requests for compensation; that tempers in the camp ran high after the arrival of Colonel Harold Washington of Pennsylvania, who had been part of the Trenton negotiations and had earlier talked down the Connecticut mutineers; that an anonymous Address was circulated throughout the officer corps, which stated in its beginning:

After a pursuit of seven long years, the object for which we set out [independence] is at length brought within our reach!— Yes, my friends, that suffering courage of yours, was active once— it has conducted the United States of America through a doubtful and a bloody war! It has placed her in the chair of independency, and peace again returns to bless— whom? A country willing to redress your wrongs, cherish your worth, and reward your services, longing to divide with you that independency which your gallantry has given, and those riches which your wounds have preserved? Is this the case? Or is it rather, a country that tramples upon your rights, disdains your cries, and insults your distresses?

There’s a reason why the whole thing is sometimes called the “Newburgh Conspiracy,” involving some of Washington’s political rivals at that time. But even after he won that round, the officer corps was still pressing hard for commitments frm the new parliament, and only mentioned the “new western lands” as a last-minute dodge to make sure their debts would be paid. In other words, these soldiers were not jonesing to go grab Indian land: they wanted enough cash to go home to their families.

In particular, writes Freund, some officers at Newburgh who were NOT among the dissenters were instead trying to leverage soldiers’ grievances for a state of their very own: to “turn the insidious counsel of the “fellow soldier” into a positive scheme which would utilize the promised bounty lands and other land grants for the establishment of a new state for veterans on the Ohio.”   With the bloody history of the rest of the West still to come,  two other interesting details from this story. The original plan for the still-to-be-created veterans’ state included “the preparation of a constitution previous to going west which would exclude slavery,” fascinating when the commander-in-chief was still a slaveowner.  And Alexander Hamilton, who wrote the final agreement, included the provision that “the money and pension claims of the army would be treated in exactly the same way as the claims of any other creditor upon the exchequer of the United States.” In other words, welcome to the very first “entitlement” to be passed on  to future generations.

What was then called “the West,” Freund writes, felt an appropriate dumping ground for all those now-useless soldiers, as “a proving ground for the political principles of independence, self-government, and personal liberty for which the war had been fought. Thus, the lands on the Ohio beckoned with the lure of still another Utopia. In these empty expanses would rise a new community from the seeds of a corporation of New England veterans who had forged their swords into plowshares.” Again, what empty  spaces? I want to ask that nice historian, before thanking him for his answer to part of my question.

Why did I talk about a “lying promise” in the title?  Because the power brokers, as sincerely as they believed in their new nation and hoped to outrun “the slave question,” that veterans’ state was likely never a real idea to them. Or if it was, it was as convenient as giving rights to Palestine to a newly-decimated Jewish diaspora was to Europe in 1948: a seemingly elegant solution to a vexing problem that didn’t require them to sacrifice anything.

I’ve talked so much about this, I don’t have room to talk about(or you the patience to hear, likely)  what I learned about the Iroquois and Creek nations. I promise that tomorrow I’ll pull myself back into the 21st century, at least to see who’s still standing in Marja.