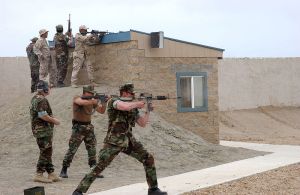 So the scene I included in my Murtha-obit post? I once thought of it as a prologue for the entire book — except that even if I,’d been right on deadline, that 2005 scene would have felt miserably old. Then, I thought perhaps it should n open my final chapter of Ain’t Marchin, even when I realized that it’s now not scheduled to come out Murtha’s demand had mostly been met, when MOST of the troops Murtha wanted to be out will be back home (inshallah), and perhaps so will most of this year’s Afghan surge (trying not to laugh). If I wrote the chapter like all my others — a straight chronological narrative, touching base with my core themes and characters who exemplify those themes — where *would* I put Murtha’s speech? At the beginning, though many of the newer vets I’ve spoken to were already at stage two-four-five of their griefs? Is there a definable beginning to all this, or an end?

And I realized something important: if I’m only barely qualified to identify beginnings, end, trends and causality in stories of long ago, these wars are just too much of a moving target. And what is also true: what I am not is a sniper, unlike a number of the guys whose stories are before me. (Or the guys above, members of a US Navy 070520-N-0933M-084 Combat Service Support Detachment (CSSD) 1 and CSSD-3 firing the M-4 rifle at various moving targets during a live-fire evolution exercise.)

Better journalists than I have been busy documenting the pieces I care about — George Packer, Kelly Kennedy and Dexter Filkins embedding with active-duty folks, while Helen Benedict, Mark Benjamin and Aaron Glantz have charted the newest efforts to address combat trauma and Dahr Jamail, Sarah Lazare and David Zeigert have been chronicling much of the dissent as it happens. You don’t need me even to hold a flashlight: for the most part, these are young (and some not-so-young) people who are, as I wrote for Guernica late last year, both media-savvy and self aware: “Between the internet and a culture that understands trauma (at least at the Dr. Phil level), they know what PTSD is and how it affects them.” They’re telling their own stories and hacking their own paths through the detritus we’ve thrown their way.

What I can offer instead is a series of scenes, each with what I see as the relevant echoes of the past — some of the latter embodied in actual people who’ve stuck around, or nearly (Zinn, Murtha on the “nearly” list — and my own tentative take on where those scenes, and the people in them, fit along that zig-zag path I talked about in the introduction. If newspapers are the first draft of history, this is a cross between a clippings file and one of those hasty pseudo-autobiographical novels young writers produce when the raw material is too fresh.

I’ve also tentatively decided not to use real names in the case of the young veterans, even those who have already published books of their own. Because another moving target is the actions of the Court of Appeals of the Armed Forces and the Defense Advisory Conscientious Objector Review Boards, or the approval process of the Veterans Administration. And I don’t want something someone said to me, even if they agreed to be in my book, to form the a reason for denial of benefits or a bad discharge decision.  There are no composites, and savvy people will recognize themselves here and I’m happy to provide documentation for any specifics about injuries or sequences if asked. But their experiences are theirs, and while I’m deeply thankful they’ve agreed to be part of this story I’d rather let them self-identify as they see fit after the fact.

More later; until I deliver the manuscript to my editor and agent in a few weeks, I’ll be writing posts like this every day in addition to the news feed.

When journalists talk about something as  a “moving target,” they’re often talking conceptually — the needed skills for the job, or conceptions of women, or definitions of ‘objectivity.’ The only parallel I found for my current near-terror was from medical reporters who talked about cancer as the moving target of reporting because the scientific landscape keeps changing. I’ll refrain from the obvious stupid metaphors, and just ask your indulgence while I sort it out.

2 thoughts on “today is a moving target”